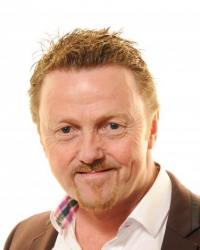 John is a much sought after hypnotherapist seeing major celebrity clients and people from all walks of life including very young children. He is an integrative therapist and uses many different approaches to a problem. John has appeared in newspapers and on radio many times for his great success with weight loss and expert knowledge of the subconscious mind. He recently gained more publicity hosting a mass hypnosis for the town of Sutton where he raised money for Rett syndrome.
if you really want results call John. If you're ready to be encouraged, praised, challenged and to finally become that person who you really want to be call John today.

I needed to sort my life out, I did some research and found a local Hypnotherapist John Mill.
I started on my journey to take myself apart and rebuild myself step by step with John’s help
using counselling and hypnosis.
It's like reprogramming your mind so you can start living your life, I never look back it's been great making changes in my life, it's helped me with so much. I am motivated and confident, relaxed and happy, more positive and it's helped to relieve my depression.
I learnt to understand comfort eating and what triggers it and how to control it and my sleep
pattern is now excellent.
John is a very dedicated professional and he is very passionate about his work.
John is friendly and a very understanding therapist. I feel very comfortable and relaxed when working out my issues with John. I am amazed with the results we have achieved. I have learnt a great deal about myself and all my friends have noticed a difference in me.
I have started to enjoy life...
I would highly recommend John Mill.

Having worried about what to expect when I first went to see John, it was a welcome pleasure to be immediately put at ease; before me was a professional and hospitable man who assured me that we could get rid of my chocolate addiction together. Now, this was something I didn’t entirely believe; how anyone could rid me of what seemed to be a habit of a lifetime was beyond me and so it was a surprise when, just sessions later, I found myself walking past chocolate and having neither an urge to pick or eat it. I felt a pang of triumph, and knew that my sessions with John had been a success. Moreover, I realised that I wouldn’t have been able to achieve this without him; it goes without saying that he has changed my life for the better and I can say with the utmost confidence that I would return to him in the future knowing that he would fruitfully help me with any problems which needed tackling.


* If you have been diagnosed or suspect you may have one of the medical conditions starred above, you should consult your GP for advice, diagnosis and treatment and always inform your health professional before starting any alternative or additional therapies or treatments.

It wasn’t my decision to be a single mum, but I woke up one March morning and that’s what I had become!’ Part of a poem I wrote when my son was a baby. I was devastated at the time, but I put everything into looking after him alone to help him to grow into a healthy, happy child.
Despite exhaustion from working and disturbed nights when he was younger plus supporting him through the stages of life, I tried to be both Mum and Dad….taught him to swim and ride a bike etc and taught him manners. He didn’t consume a fizzy drink until he was 10 yrs old, I didn’t force chips and burgers into him, but however, I still ended up with an overweight child. So unfair!
He just loved food. I am from the generation where we were told to clear our plate and I never needed to ask my son to do that!  I am a health professional and felt terrible that my son was bigger than he should be. I was in denial for a while as he grew taller and tried to ignore it was happening. He got to the teens and he got a bit lazy, computer games meant less exercise. I felt it was my fault and struggled with trying to help him eat less, walk more etc…but failed miserably. I lost myself along the way too, I was just ‘mum’ as I had put my own life on hold for him. I hadn’t his father to discuss it with and decided I would need to weigh him and face it. I was horrified to see what he weighed, too much for him at 14 yrs old. I didn’t know if they did hypnotherapy for children, but decided to have a look and there I found John’s website and he saw people in my home town! I knew I couldn’t afford it, but I had to do it. My son was really excited and looked forward to meeting him.
I found it so emotional, I felt guilty and had to hold back tears at first, but John was wonderful. So kind too and I just felt that I was sharing the load with someone who didn’t blame me like I did myself. My son liked him too and we booked the first 6 sessions. My son has teenage hormones that make him grumpy at times, but John was so great with him and made him laugh. I felt so supported and even though I wasn’t his client, my son was, I felt that he cared about me as well and it was a relief to meet with him each week. My son enjoyed the hypnosis too and with his creative imagination, it was a positive experience for him. John is a realistic human being and his relaxed, calm manner along with good humour, meant that my son had a great male role model that he could chat to, moan to and he lost weight too!! The male members of my family are not local so this was an added bonus. It is not the end of the road yet, but John has helped give me the strength to keep going and my son seems keen to lose more weight himself! So a big, big heartfelt thanks to you John, I am so pleased we met you..I think I have even found myself along the way and I am not

Well i felt the flight was going to be ok and it was better than expected.

I watched the video on the way out as he was stuck on plane 1.5 hours because the stand that pushed the plane off broke. The old me would have been crying,sweating,rocking in my chair having a panic attack,being on lots of drugs and wine!

I watched the video and was relaxed, i watched the take off and my belt waa undone,i went too loo! This is a amazing for me!I think i enjoyed it!

Flight on way home i couldnt get signal to listen or watch my video sonthat threw me a bit and i felt bit worried but after 20 mins i did some slow breathing and told myself to stop being silly then i was fine, I was not worried about the flight i think just  more anxious about the fact i had hour left and i just wanted to be home and maybe felt different as nothing to think about on way back rather than way there.

I can not thank you enough, I couldnt have dealt with a flight let alone a baby and flight together without finding you. After every session i feel so much happier and not just about flying, feel like I am enjoying life more with some time away from a busy day to day life.

When I researched help through hypnotherapy I thought I would find someone quite cliched and hard to open up to and to be quite honest I didn't expect the process to help. However when I met John, his down to earth and honest approach was appreciated. He makes you feel like you and your issues are every bit as valid to him as they are to you. I have come a long way since meeting John and his technique and advice will stay with me always.

When I came to see John, I didn’t really know what happened to me. I went from being adventurous, happy and outgoing to panicky, anxious and withdrawn. I could barely leave my road. Within 6 weeks John has already helped me completely turn my life around. I am now basically back to how I used to be and have so much more confidence in the future and present. Finding John was truly fate.

You are a miracle worker Mr Mill. The pain is better and test results for 2 tests came back with nothing abnormal. What more can I say!

Dear John. Just wanted to give you some feedback and say thankyou. We both can't believe how much you've done for (client name) in only 2 sessions, how can he have a sleep disorder for 15 years and you fix it so quickly, you're amazing John. I'm so grateful, it has made us closer and stronger than ever before, (client name) says it's like a dream come true, he just can't believe it. He doesn't even use Kalms anymore, just the cd when he needs it. Thankyou again John, I'm truly grateful

Hello John, As promised, thought I'd drop you a line to let you know how things have gone. Well the headline news is that I've not smoked at all. It been somewhat curious though, as I've craved them desperately, visualised them loads, but at no point has actually having one seemed an option. Hard work yes, uncomfortable yes, but at risk of failing, not really. My attitude towards the cravings is one of intrigue, almost as though I'm a third person watch this battle of the mind run its course - It’s strangely fascinating. Thanks,

Dear John, I would like to thank you for the support and help you have given me. I walked out beaming and still am!! (Got into car and the song on the radio was ‘Bruno Mars - Just the Way You Are’ )

Couldn't' have planned it if I tried. I promise no one is going to burst my bubble again - after a very long journey I feel I have finally been re united with ME thanks to you and my pals.

I wrote the members of our weight group a poem each tailored for them and I decided I would write you one for fun as well.

You are fixer, fix people that's what you do.

We came into you broken an blue,

You listened we spoke then we did some listening too,

We thought it would be all tick-tock, tick-tock but that wasn't true!!

You fixed us up mate and made us better, you are a fixer, fix people that's what you do.

You gave us the tools to continue the work,

You gave us back, full of belief & self worth,

We looked deep within and began to shed our old ways,

With it shone the beauty and the light we so very craved.

You fixed us mate - that much is true,

For which we are all eternally grateful to you.

You are fixer, fix people that's what you do.

John works 7 days a week and is now mainly based in the Sutton area. John will be as flexible as possible to fit in with your schedule.

View contact details Saved Save profile Email this member
More information
Before using our site, please take a moment to review our Privacy Notice and Cookies policy. By continuing to use this site we'll assume you agree to both.
Ok