A 35 year old women decided to have hypnotherapy to help her lose weight and to get over a fear of motorways. This lady had struggled with her weight for many years and had tried every diet she could possibly find. She didn't have any confidence in herself and the fear of motorways was a real problem for her. She was also concerned about passing this fear on to her children.

This lady's weight had reached 16 stone 4lbs which for her height of 5ft 5 was getting very close to being morbidly obese. She really couldn't see how life could change for her and was almost at the point of accepting that's how her life would be from then on.

During this lady's first hypnotherapy session she was asked the question, what would you like to achieve from having therapy?

Two weeks later this lady had overcome her fear of motorways and was very proud of herself for doing so!

Eleven months later she had reached her goal weight of 9 stone 10lbs!

Life had completely changed for this lady. She became much more confident. She was happy and enjoying buying new clothes - a size 10 - rather than a size 22 and she was now visiting relatives that lived 200 miles away by driving on the motorway. She had turned her life around.

That lady was me!

All this happened 15 years ago and, apart from half a stone, I have kept the weight off ever since! I was so impressed with the life changing results I had achieved with the help of hypnotherapy that I went on to train as a hypnotherapist some years later when my children were older.

Sandra - before and after Hypnotherapy.

I have immediate openings for distance-therapy (FaceTime, Skype, WhatsApp or phone sessions) and will be honoured to support you during this time of uncertainty. You're very welcome to just pick up the phone and contact me. I look forward to speaking to you!
As an experienced and advanced Hypnotherapist and Psychotherapist, I have over 12 years experience dealing with a wide range of issu… Read more

As co-founder of the HypnoGastricBand method, I am always conscious that some people are seeking a quick fix for... 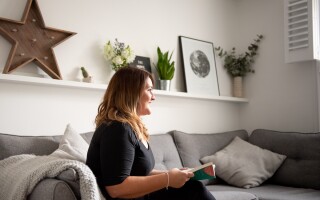 Lose your lockdown weight with hypnotherapy

Have the last few months led to lockdown weight gain for you? A recent poll found that 48% of British people say...