Self hypnosis - with art at it's heart

As a practising clinical Erickson hypnotherapist, I find the link between expressive art therapies and hypnosis both symbiotic and firmly intertwined. The processes of visualisation, guided imagery and metaphors used to induce a hypnotic trance are parallel to those experienced during acts of creativity when the ‘space’ between the conscious and unconscious mind is accessed. 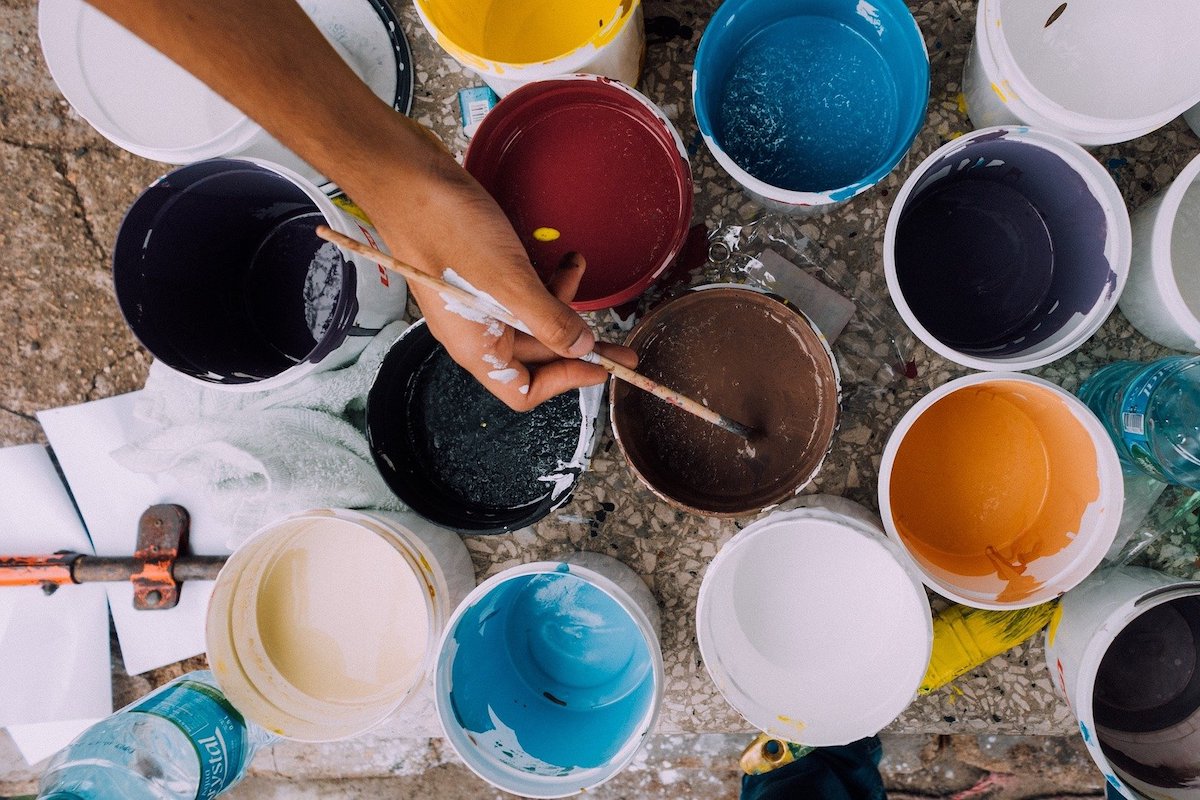 As a practitioner, I physically observe the ‘hypnotic point’ as the client’s breathing becomes slower and the muscles of the face relax. This is the initial relaxation which occurs prior to deep hypnosis, and has been described as essentially the ‘creative process’ experienced by many famous artists who achieve a trancelike or self-hypnotic state whilst working. Within art therapy, we can employ hypnotherapy to evoke this state in those who find vocalisation difficult, as it allows entrenched phobias, worries or fears to be expressed through doodles, prose or painting rather than recognised dialogue.

The simple inclusion of a 'creative' hour every day, be it keeping a journal, the use of paints, clay, craft materials or photography can stimulate the frontal cortex and allow cognitive abilities to remain healthy.

My own interest in art therapy occurred whilst observing children with behavioural difficulties. Using the most simplistic form of hypnotherapeutic methods, I engaged the children in creative activities thereby allowing them to communicate their innermost feelings without actually talking to the adults in the room. Barriers were removed and healing could begin, our understanding of the psychological needs of individual children was evident from their work.

These same principles were used with the children of Auschwitz who could not talk about their experiences, used various forms of expression and artwork to enable them to have a 'voice'. Another example would be the survivors of trauma (e.g. Twin Towers) who cannot verbalise their experiences because of the severity of the event but can enter a hypnoidal state which takes them to the point between being awake and asleep. Channelling this further, through creative processes, they are able to vocalise emotions, pain and distress associated with the trauma through pictorial or written methods.

The history of art and hypnosis

Whilst both art and hypnosis have existed historically, the concept of  ‘art therapy’ was really only classified in 1915 when the first art therapy school was established in New York. However, the use of art within the therapy framework became recognised in 1942 when a British artist (Adrian Hill) noticed the positive impact of drawing and painting opportunities on patients suffering from psychological issues e.g. shellshock or PTSD. It now has a long tradition of use in supporting mental health.

However, like hypnotherapy, the use of art has preconceived labels preventing people from accessing art therapy sessions as a form of healing. This is due to a number of factors. For example, the invaluable work of Freud and Rorschach (inkblots) introduced the concept of psychoanalysis with regard to creative processes and finished products. This was reinforced by the stereotypical image of highly educated individuals critiquing various forms of art. Not only does this marginalise people, as it is invariably seen as elitist, but the pressure of having any piece of work closely examined increases self-doubt and damages the self-esteem of the producer.

The idea that our innermost feelings and hidden messages are expressed through our creativity is daunting, resulting in the avoidance of analytical examination. Let's be honest, when we doodle on the pad next to the phone, do we really want someone telling us its indicative of psychosis or repressed memory?

In addition to this, the mere mention of using 'art' (in whatever form) can create feelings of unease, especially when faced with a blank page. In many, it can reawaken deep-seated fears or feelings of inadequacy. Often this rejection of creativity begins in childhood when children are asked to create a copy of an image but the expectation (by the adult) is for an actual 2D representation of an object to be made.

The child makes every effort to reproduce the image they see but they invariably produce something uniquely different to their peers and often the adults involved inadvertently begin the process of 'failure at art' through a simple facial expression or well-meaning criticism. Of course, I'm generalising because there are many who encourage and praise creative efforts but it only takes one occasion to germinate the idea that you are not successful in any form of artistic representation. 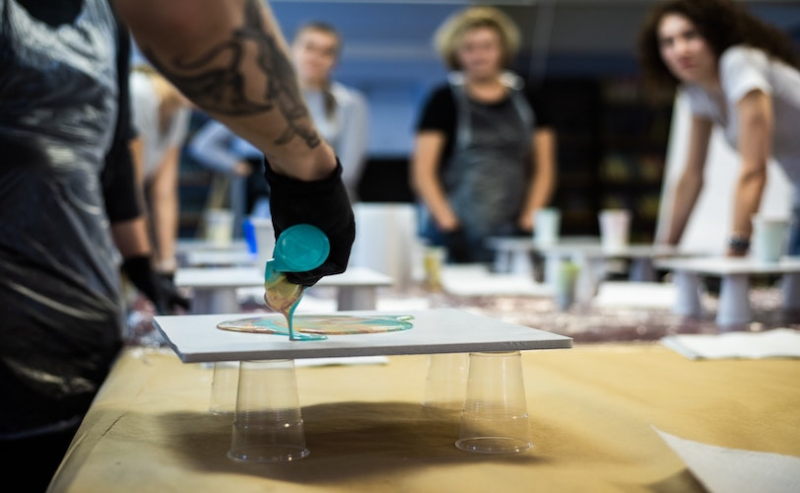 I focus on acrylic pouring techniques in my workshops because this relieves the need to have recognised artistic skills. I developed this area of expression specifically after researching my client’s art experiences. Nearly all clients who request hypnotherapy expressed in their initial consultation that they were ‘not creative’ or 'never very good at art or creative writing at school.' They have a predisposition, associated with low self-esteem, to compare themselves to others and of constant failure in this area of their life.

As creativity is a valuable psychotherapy tool, it is obvious that the individual's ability to self heal in times of stress is reduced. Consequently, some people seek outside help when the process of healing could begin in their own engagement of expression.

The relationship between hypnotherapy and creativity

The relationship between hypnotherapy and creativity must be strengthened. In the workshop situation, I engage all the participants in group hypnosis involving relaxation techniques, visualisation and hypnotic suggestion including the idea that artistic skill is unnecessary. After demonstrating the processes involved, I perpetuate the light hypnotic trance through the use of binaural music which supports relaxation. There was little interaction after this point and it is interesting to observe that clients do not look at the work of others (for comparison and reassurance that they are ‘doing it right’), but rather become intensely focused on their own piece. The sessions are calm, with little talking but more of an unspoken collaboration.

The session ends with a reintroduction of the concept of mindfulness with controlled breathing exercises. I encourage the attendees to replay the session in their minds, before counting them out of their hypnotic trance. After a few minutes, everyone is eager to share their work with their peers. This is usually accompanied by an explanation of colour choice, etc., and – on occasions – some verbalise their inner feelings without embarrassment. Overall, the client’s self-esteem is visibly boosted.

There is also a discussion whereby they comment on being so involved in the processes that their thoughts, worries and other issues are temporarily forgotten. One lady who was physically ill through overthinking the consequences of the COVID pandemic reported back say that during the session she had no thoughts intruding her thinking and that, for the first time in weeks, she felt positive about the future.

There was an overall consensus that ‘time had stood still’ which is a typical reaction from hypnotic subjects as the subconscious does not recognise timeframes. Whilst all felt relaxed, at ease and happier than they had felt for some time. 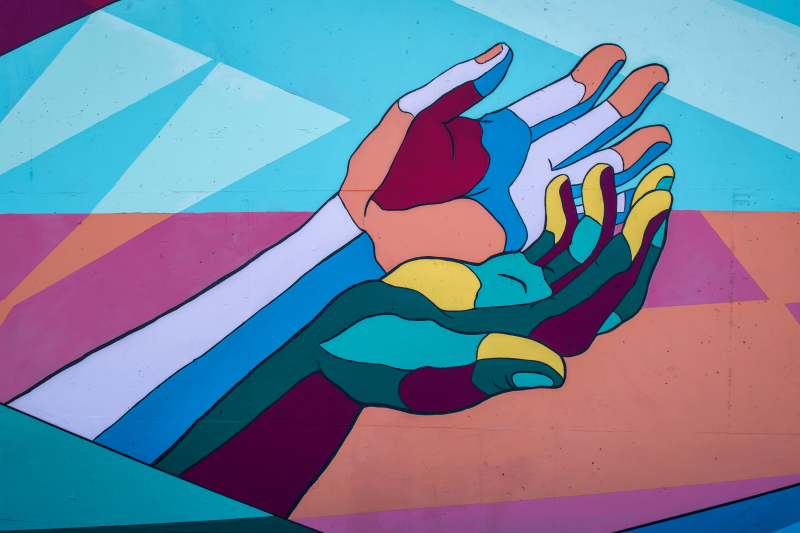 As an experienced psychotherapist, I love the transformations that happen in these sessions. Watching clients engaging in an activity which allows them to gain mental relaxation whilst releasing inner turmoil through the use of paint is always an added benefit for the practitioner and makes me appreciate the role I play in facilitating this.

More recently, during the pandemic, lockdowns and, for many, months of self-isolation it is becoming very obvious that the brain - devoid of new stimulus and reduced production of new neuro-pathways (gained when engaged in problem-solving, creative activities or simply something new) - turns inwards and begins to recall memories many of which come at an emotional cost.

When this level of trauma emerges, combined with high levels of stress, there can be evidence of short term memory loss, brain fog and elements of confusion leading to a heightened level of anxiety. This in turn perpetuates an alarming state of mind. This has been especially noticeable in the older generation who usually have a significantly reduced level of social interaction.

I'm now encountering people who are diagnosed with the onset of dementia but in actual fact, are suffering from elements of what can only be described as 'Lockdown Syndrome'. The simple inclusion of a 'creative' hour every day, be it keeping a journal, the use of paints, clay, craft materials or photography can stimulate the frontal cortex and allow cognitive abilities to remain healthy.

Hypnosis and art therapy are more essential now than ever before.

Globally, we are in an unprecedented time where new experiences are reduced. It is vital to engage in your own self-healing by supporting the best level of mental health possible through the process of self-hypnosis. Give yourself permission to step outside your comfort zone - letting go of your, "I'm no good at …" insecurities and embrace creativity in whatever form you like.

Splash the paint, draw, sculpt or just doodle. Grab your pens, pencils or crafting materials. Make something unique and attractive for your home, garden or yourself. Remember, you have the power to be creative, so be confident, allow yourself time to build new neuro-pathways. Express your feelings but most of all give yourself a little therapy.

Dawn worked in education for thirty years, specialising in behaviour management and neuroscience in schools, but she has also worked with adults. Having left the education sector she decided to follow her passion for psychotherapy and retrained as a Clinical Hypnotherapist, Life Coach and is also a Professional Relaxation Coach and Art Therapist.