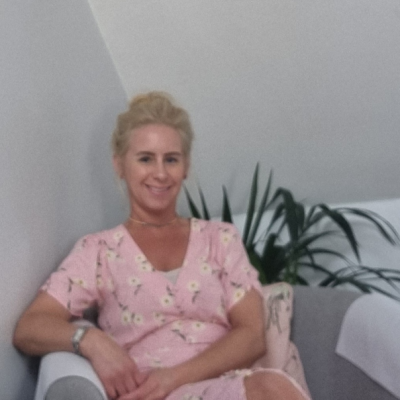 I provide hypnotherapy to help those who wish to help themselves, from promoting a sense of well-being to aiding relaxation and making positive changes to improve your life.

Hypnotherapy is a relaxed, focused state of concentration, (the bypass of the critical factor), helping the subconscious mind to become susceptible to the beneficial messages that are planted during hypnosis. Throughout this hypnotic state, likened to daydreaming,you remain in control at all times.

I am also a qualified NLP (Neuro-Linguistic Programming) practitioner, Psychotherapist, including CBT (Cognitive Behavioural Therapy) and Counsellor. These skills, I believe benefit any hypnotherapy work by means of my ability and experience working with client's in a therapeutic setting whilst always being empathic, non-judgemental and easy to talk to.

I enjoy my work immensely and gain a great deal of satisfaction from helping people to live a more satisfying, constructive life. Please see the bottom of this page for some client testimonials.

I am flexible with regards to working evenings for those who are unable to attend daytime sessions.

ACCESSIBILITY: My practice is unfortunately not accessible for those in wheelchairs or who have great difficulty with stairs as my office is located on the 2nd floor with no lift available.

I have an up to date DBS

Past Life Regression and Childhood regression-For uncovering and letting go of memories/experiences that are holding you back in the here & now or purely for interest on the client's behalf.

"I approached Sam to help me with a long term fear I had of dancing. I felt embarrassed at 1st about my problem, but after talking with Samantha, she made me feel at ease and we discussed possible treatments and after 3 sessions I was up dancing and enjoying myself the following weekend. I would recommend Samantha to anybody who is looking for help to solve any problem they have that is holding them back in life. She is easy to talk with and very professional.Thank you Sam". J R from Bham

"A non-believer in hypnotherapy, though as a last resort, I decided I had nothing to lose. I therefore approached Samantha who, in one session, assisted me in dealing with the stress I was experiencing within my work. The hypnosis did help me through a difficult time. Highly recommended". Tobe from Bham

"I saw Samantha for 2 sessions, 1 to help me cope with an MRI scan I was terrified about and the other to help with my fear of flying. Using visualisation alone, I was able to get through both fears without a sedative or panic attack in sight. Karen from Great Barr

Depending on the issue/s to be treated, often the consultation and hypnosis can be done in one session alone. Please enquire for further details.

Please allow up to 1 hr per appointment

Look out for offers throughout the year.
I am passionate about my work and care about my patients wellbeing and therefore offer an aftercare service whereby I like to stay in touch with anyone I have treated and offer a 'catch up' appointment if desired, to see how well they are doing and to offer any further ongoing encouragement thereafter.

I was due to abseil down the 100-metre high Spinnaker Tower in Portsmouth for charity, and with a terrifying fear of heights was really worried about failing on this mission. The thing I was most fearful of was walking out onto the ledge and stepping over the barrier to get into my harness.

I've always been a little bit sceptical of alternative therapies, including hypnotherapy, but I was recommended by a friend to visit Sam to discuss my concerns over the abseil. I met with Sam who instantly put me at ease and made me feel very relaxed and comfortable. I was impressed with her honest views as to whether a sceptic such as me would be a successful patient. I promised to remain open minded...I needed the help so was open to any support being offered. The day of the abseil arrived and after reaching the top of the tower my stomach began its usual churning - and I was still inside the building at this point - all I wanted to do was go back downstairs and head home. I took a moment to focus on the strategies Sam had given me, and within a few minutes I began to feel as though I was in control and not my fears. I was then called out onto the ledge and without any hesitation or second thoughts I stepped out onto the ledge that overhung the tower at a height of 100-meters, climb over the short barrier, sat into my harness, and began my descent. All this happened within a few minutes, I couldn't quite believe I had got myself into that position without thinking about it, it just kind of happened. I can't describe how that felt, it was quite surreal, I really didn't think the hypnotherapy could work that well. I was wrong - it worked brilliantly! After about 20-minutes or so I reached the safety of the ground, upon looking up at where I'd been I couldn't believe I'd achieved something I thought was never possible. I am absolutely convinced it was the session I had with Sam, and only that, that enabled me to accomplish what I did that day. There is no way I would have been successful without Sam's intervention and strategy development. I would have no hesitation in visiting Sam again should I ever be in need of her support - a true professional. Wayne from Berkshire

Global Business Centre, 38a High Street, Sutton Coldfield, B72 1UP